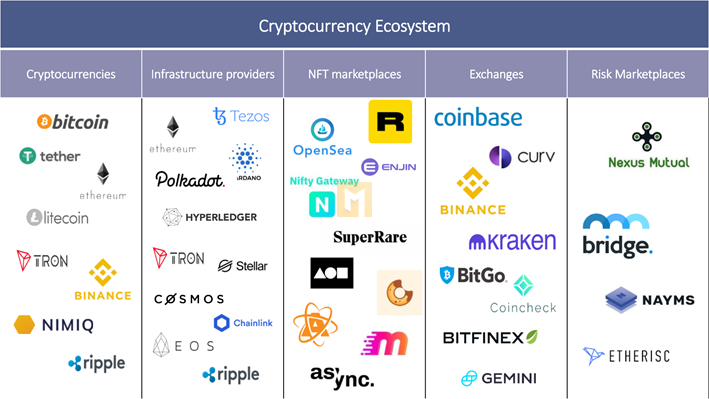 Taking your first steps into the crypto ecosystem can be intimidating. You start thinking it’s magic money on the internet, then you realize it’s just another use case where blockchain technology and cryptocurrency are disruptive. So what is the crypto ecosystem map like? This article briefly introduces the main areas that will guide your journey.

Your entry into the world of cryptocurrencies is likely through Bitcoin. This makes sense, because as the first cryptocurrency – born in 2008 – it has been an inspiration for everything that has followed.

The creator used the pseudonym Satoshi Nakamoto, but no one knows who he is in real life. Their intent was to create a new and better form of money that was not controlled by governments, had a built-in scarcity, and did not require permission to use.

The way Bitcoin achieves this is through the blockchain. This technology is intended not only to create a monetary system but also to share and validate all kinds of data without relying on a central police authority.

If you’re wondering what’s wrong with the money we already have, read this separate article on fiat money and how it works, but Bitcoin’s success has inspired other types of money on the internet:

Privacy Coins – Bitcoin is completely transparent, every transaction can be seen on its blockchain and possibly linked to a real identity. For this, private coins have been developed, for example Monero or Zcash.

Stablecoins – Digital clones of Euros/Dollars that act as a bridge between existing money and cryptocurrencies such as Bitcoin. They are easier to move across borders, but their value is stable.

Bitcoin Forks – Bitcoin is open source. Anyone can copy and modify aspects they think they can improve. This has happened several times, most notably with Bitcoin Cash (BCH).

Faster and Cheaper Coins – Bitcoin sacrifices speed for security and decentralization; verifying a transaction on the blockchain can take around 30 minutes and costs a few dollars/euros. Other cryptocurrencies have gotten faster and cheaper, but decentralization sacrifices, which means they are vulnerable to censorship or the government. Examples are XRP, XLM.

Blockchain would also light up the touch paper with an explosion of ideas using blockchain technology.

Level 1 Blockchain: Simplify the creation and investment in digital projects

Another cryptocurrency inspired by Bitcoin’s blockchain design was Ethereum. Ethereum acts as a new kind of internet money – it’s faster and cheaper than Bitcoin, but is considered less decentralized – but more importantly, it serves as a worldwide computer available for rent. Bitcoin and Ethereum are described as level 1 blockchains.

Think of the power Apple or Google have in deciding which apps are available in their stores and how app makers are forced to share revenue and follow strict guidelines. With Ethereum, anyone can build an app, actually called a dApp, and there are no rules for doing so. It acts as the engine for all calculations and provides an easy way to create a token that allows users to leverage the dApp.

Ethereum has spawned an explosion of blockchain-based applications, described as Layer 2. Its popularity has resulted in the fees users of these applications pay to transact through Ethereum’s computing power – known as EVM (Ethereum Virtual Machine) – have become prohibitively expensive and created competition with other similar tier 1 applications.

Each Tier 1 application is its own ecosystem. The more Layer 2 applications supported, the greater the potential impact on the network and the overall value it represents

Cryptocurrencies are useful – they can be used now to obtain certain things – but they also have speculative value based on future adoption and use.

Unsurprisingly, people focus on making money, so a large part of the crypto ecosystem buys/sells cryptocurrencies on exchanges to speculate on future value, such as buying shares of publicly traded companies.

Not everyone wants to trade the cryptocurrencies they own, but they are interested in earning passive income just like you can earn interest on savings. You can think of this as a crypto bank. Cefi – Centralized Finance – uses well-known corporate agreements with offices/staff and regulations to offer interest/loans on your cryptocurrency.

Blockchain technology has enabled trading and asset management without a formal structure behind it, everything can be managed with code – in the form of smart contracts – and managed with solutions built on top of L1 blockchain – as described above.

This whole area is called Defi (decentralized finance) and it fundamentally disrupts Wall Street, hedge funds and the walled gardens of wealth management.

As the blockchain ecosystem started to expand, it became quite clear that the chains were meant to be connected.

Currently, this is usually achieved using bridges, which can be complex and expensive. This inspired the development of so-called layer 0 blockchains, which in turn support L1 blockchains, enabling interoperability, allowing L1 blockchains to be functionally connected to each other. Examples of level 0 threads: polka dots and cosmos

For blockchain and smart contracts it is equally important to receive/send data from the outside, otherwise they can only work by referencing themselves. Oracles provide this service by sharing data in a very specific way that maintains its independence, essentially crowdsourced instead of coming from just one provider. This can be price information, weather/temperature information, sports scores; all the data that would feed the dApp. Examples of oracles are: Chainlink, Band and Augur.

You should have been hiding in a cave for not mentioning NFTs – non-repairable tokens. You can think of NFTs as digital receipts; they provide proof of ownership which is stored permanently on the blockchain. Immutability is a fancy word for something that can’t be changed.

NFTs can prove ownership of both digital and physical items, the most obvious being art and collectibles. Created in 2017, a collection of avatar-style images called CryptoPunks was among the first NFTs to be created on the Ethereum network. Many early NFTs have since skyrocketed, inspiring the creation of NFTs in sports, music and brand development.

While the focus is on the resale value of NFT collections, NFTs have a much broader use case that unlocks latent value in things like membership models or user-generated content. Imagine that your gym membership or Netflix subscription is an NFT that you can transfer if you don’t want to?