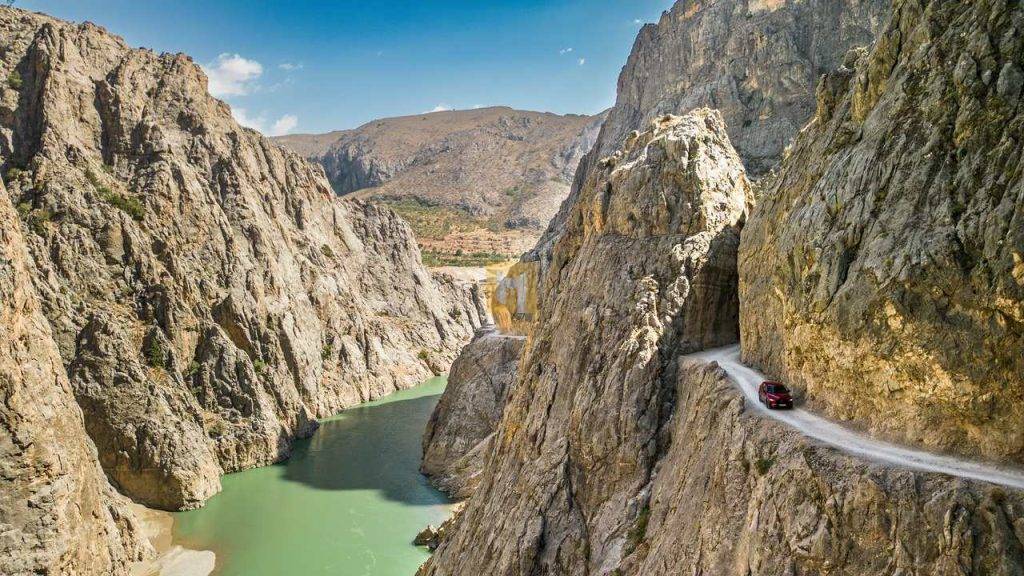 If you’re in the mood for a thrill, consider a trip along the Kemaliya Stone Road (Tas Yolu) in eastern Turkey, dubbed “the hardest road in the world.” I enjoyed an exhilarating ride on the Stone Road as part of an 8-hour journey in a Mazda CX-60 from Elazig to Cappadocia.

It is a short 10 km narrow and unpaved section located in the Munzur Mountains and connects Divrig in the Erzincan region with the charming Ottoman town of Kemaliye. The rocky gorge is so deep that the sun barely reaches the bottom.

The journey from Elazig passed through a beautiful sandy and barren landscape. It felt remote, but there was a lot of activity along the way, with shepherds tending to their herds, stray cows appearing on the road, geese occasionally walking by the side of the road watching passing traffic, and people working in the vineyards.

Soon the roads turned to gravel, Rocky Mountains rose to the side, while sheer cliffs offered a steep drop to the Euphrates as the river followed our path.

And then I saw it; Kemaliye Tunnel, a short tunnel that opens onto a winding yellow and gravel-filled stone road, apparently no wider than the waist.

The scenery was beautiful, but there were several moments when I was solely focused on how well my Mazda handled and handled those corners.

At the time, I didn’t care that it took 132 years to complete. Or that the blood, sweat and tears of the locals tore cracks in five kilometers of stone. According to the memorial on the first bridge of the road, some unfortunately lost their lives while cutting through the impenetrable rock of Karanlik Kanyon.

All I could think (really scream) was that they could have made these FGS dirt roads wider. At its narrowest point, the road is less than two meters wide. I forced myself not to look down as I passed about 450 meters of cliffs that peaked at 800 meters.

It was unimaginable to go over five miles an hour navigating those steep banked corners.

On the other hand, I occasionally got out of the car to look in awe at the breathtaking and breathtaking scenery in the gorge, which was naturally created by the emerald Euphrates, the longest river in Southwest Asia. The river really has its own excitement when the riverboats pass through the gorge. I have seen tourists looking at the landscape and imagined people wondering what the sky was like.

After the reports, I then went through 38 tunnels, which were fun to walk through. The large holes in the tunnel walls let in daylight, and I wouldn’t have wanted to burn rubber there in the dark.

After the tunnels, the landscape changes to a green landscape with slightly winding, sometimes uphill and sometimes steep roads. It didn’t matter that I was hardened after experiencing Kivitie. Now I could relax on my way to the city of Kemalye.

What a surprise Kemaliye (alias or Eğin) turned out to be. The city is built on a slope of 30-45% and surrounded by its wooden buildings and the beautiful Munzur Mountains on the slopes, I felt like I had entered a small village in Switzerland. I later learned that the city planning was typical of the Ottoman/Anatolian cityscape.

The sinking of all the excitement made me hungry and I sat down at Bozkurt Turkish Restaurant in Kemaliye. I had a Turkish dish called Kavurma (stewed chunks of beef) with rice and Turkish tea.

The owner of the restaurant, Tarok, in all seriousness, asked me if I would do a base jump (jump from a high cliff with a parachute) into the canyon with the others later that day. I could only manage a nervous laugh.

The Mazda CX-60 marks the beginning of a new chapter for Mazda. Not only is it our first car with a plug-in hybrid powertrain, it also sets new standards for interior quality, design and technology, highlighting Mazda’s unique Japanese premium brand.