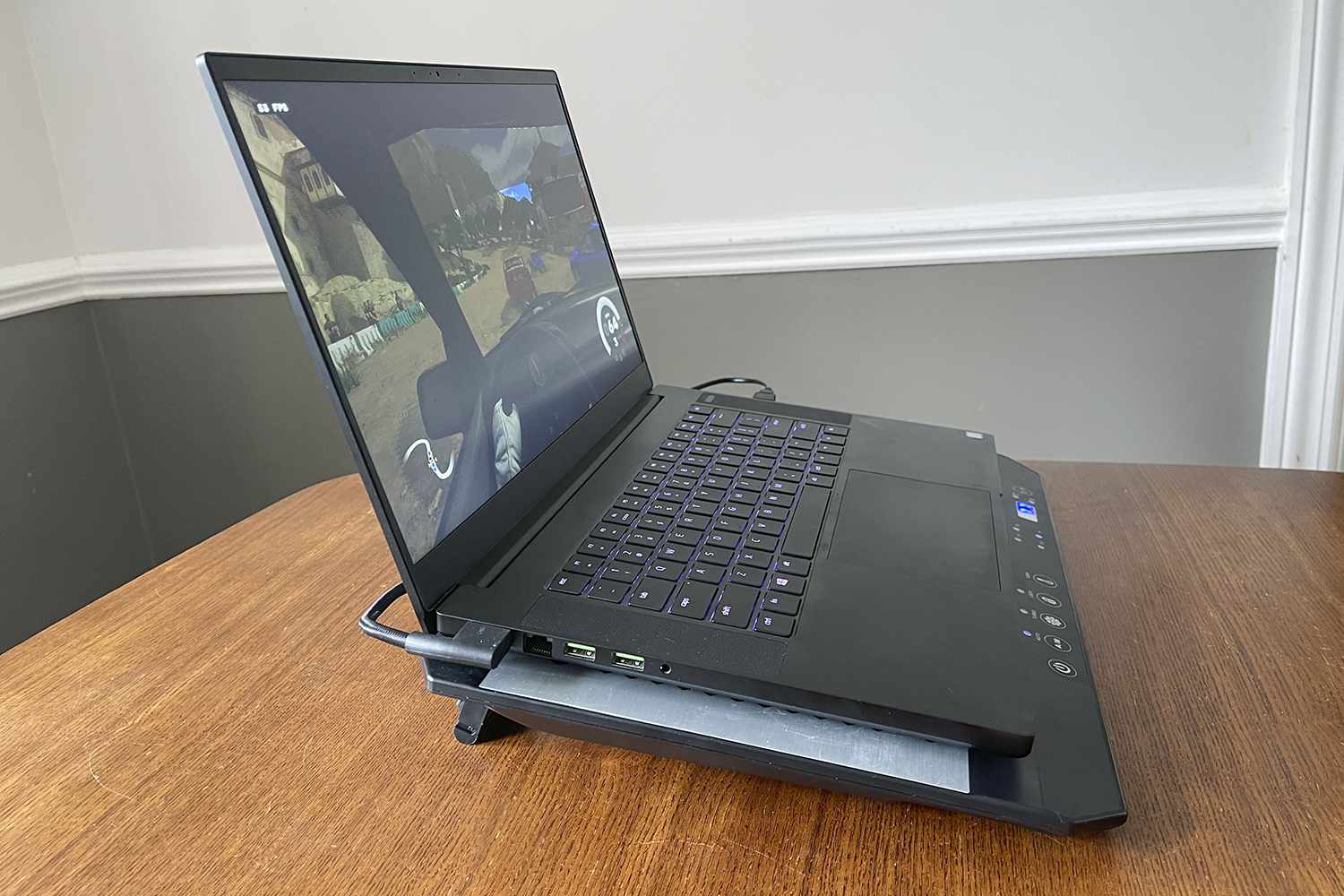 We bought the Thermaltake Massive TM Laptop Cooling Pad so our reviewer could test it out. Read their full product review.

Thermaltake’s Massive TM Laptop Cooling Pad is a more durable option than most laptop coolers. While many of its competitors are simple plug-and-play accessories, some even without power buttons to control operation, this pricier option has more control buttons, an LED display, and even temperature sensors to monitor the laptop’s heat. To guard.

There’s a lot to do here, and it’s two or three times the price of some alternatives. Is it worth the extra money, or is it just frills that don’t add much to the equation in the end? I tested the Thermaltake with the Razor Blade 15 (2019) gaming laptop to find out.

Design: where are the caps?

Massive TM has a distinctive look among laptop cooling pads, although it works much the same inside. It is mostly plastic with a solid core and a durable construction that appears to withstand wear and tear. Meanwhile, the brushed aluminum surface above the dual 4.72-inch fans has an attractive hexagonal pattern that’s more appealing than the simple grilles of lower-cost competitors like the Top Mate C302 and Kotok Laptop Cooling Pad.

However, that’s not the only difference in the laptop’s surface. It has four small buttons that protrude a few millimeters with raised points on the top, and the buttons gently drop down when the laptop is in place. These are four temperature sensors that monitor your computer’s heat, and you can slide them left or right in the included manual to best suit the size and shape of your laptop.

They also double as a laptop stand for some stuff, but I’m not sure if that’s on purpose. The competing cooling pads mentioned above have flaps on the ends that hold the laptop in place on top of the pad, but the Massive TM has no such thing.

It’s a curious omission, as the temperature sensors can’t hold the laptop in place as tightly as the thick caps on the bottom. The Razor Blade 15 didn’t move too much, but my MacBook Pro, which has no fan vents on the bottom, slipped quite easily.

The lack of caps was probably a design decision to place the control panel on the underside of the surface. It has a power button, an auto/manual button, a turbo fan button to increase airflow in manual mode, a lock button to make sure you don’t accidentally change the cooling settings during use, and a temperature button for manual switching. Between four sensors. There is also a button next to the display to switch between Fahrenheit and Celsius readings.

A pair of USB-A ports are located on the back of the pad and you can connect the Massive TM to a laptop using one of the ports with the supplied cable. The second port can be used for another laptop accessory, such as a wired mouse or a USB memory stick.

Installation process: just plug it in

Massive TM is powered only by USB connection to a computer and no software is required to operate it. All the controls you need are present on the platform. Note that there are optional rear legs under the pad that not only pop out, but also have a removable secondary leg to increase the tilt of the computer. The downside, however, is that the lack of caps allows the laptop to slide off the cooling pad, as my MacBook Pro did when I fully extended my legs.

The Razor Blade 15 gaming laptop I used for testing has a 9th Gen Intel Core i7 processor and 16GB of RAM paired with an NVIDIA GeForce GTX 1660 It GPU. Through two games and a benchmark test, I measured the internal temperature with NZXT’s CAM software and the external temperature with an infrared thermometer, first with the laptop alone and then again with the cooling pad in automatic mode when the laptop is back to room temperature.

However, I didn’t see much of a difference when playing Fortnight, where I hit 192 degrees internally and 118 degrees externally on the laptop alone and 190 degrees internally and 106 degrees externally with the Massive TM, even though it was top notch. Between 160 and 170 degrees. The Top Mate C302 did a more consistent job of cooling the inside of the laptop in that game.

Likewise, the Massive TM pad didn’t do much in the Dirt 5’s built-in benchmark test, at least with the automatic cooling feature enabled. The Razor Blade 15 reached an internal peak of 184 degrees and an external peak of 117 degrees, dropping slightly to 175 degrees internally and 116 degrees externally with the cooling pad in automatic mode. However, I ran a separate test in manual mode and turbo fan and recorded temperatures of 171 degrees indoors and 111 degrees outdoors.

In other words, you should probably use the manual mode with turbo boost for best results. The fans spin a little louder in turbo mode, but not significantly. In automatic or manual mode, with or without turbo, the Massive TM has an extra buzz, almost like a soft rattle. The other cooling pads I tested were quieter overall.

At $ 20, the Top Mate C302 laptop cooling pad is a solid budget option. It is lightweight and feels thinner than Thermaltake Massive TM and is not designed for larger 17-inch laptops. However, if you have a smaller laptop and want something simple and straightforward to blow fresh air into your computer, it will do the job inexpensively.

There are better and cheaper options.

If you really like the look of the Thermaltake Massive TM laptop cooling pad or think you will benefit from the temperature zone measurements, it may be worth paying for compared to competing cooling pads. However, for the average shopper, the extra features here add nothing to the overall user experience. You could also spend half the money or less and opt for the Top Mate C302 or the Kotok Laptop Cooling Pad instead.